Make these Kentucky Derby® recipes and you’ll feel like a winner! 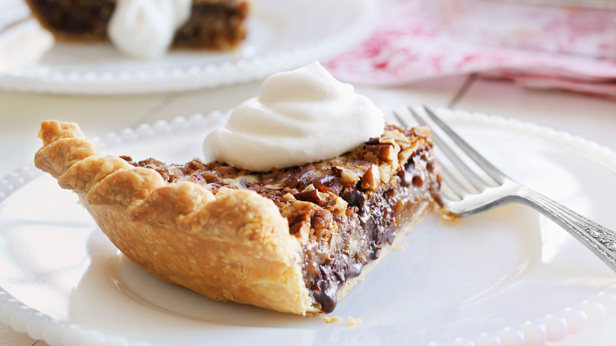 If it's the first Saturday in May, the horses are running at Churchill Downs in Louisville, Kentucky. The lucky Kentucky Derby attendees celebrate by donning their racetrack best (the women wearing spectacular hats), drinking a frosty mint julep and eating a piece of Derby-Pie®.

You can make your Kentucky Derby party a winner with our delectable version of a similar pie, made with pecans, chocolate and, in honor of the state of Kentucky, a dash of bourbon. Visitors to the Kentucky Derby at Churchill Downs can also buy their mint juleps in a commemorative glass—a different one for each year (the glass shown below is from 1954, the year the Derby-Pie® was born). If you’re watching the Derby at home, however, you might want to serve the drinks in the classic mint julep cup, which is a tumbler made of sterling silver. 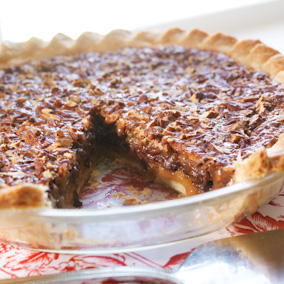 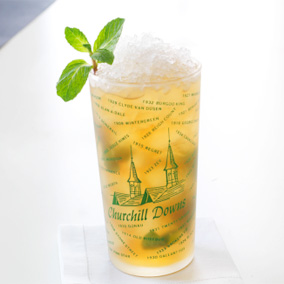 More pies to tryTry these tasty takes on tradition

Rum-raisin pecan pieUse golden raisins (or regular raisins) instead of the chocolate chips. Reduce the brown sugar to 2/3 cup. Use dark rum instead of bourbon.

Almond-butterscotch pieUse slivered almonds instead of pecans, and butterscotch chips instead of chocolate. Reduce the brown sugar to 2/3 cup. Omit the bourbon. Add 1/4 teaspoon almond extract and 1 tablespoon Scotch whiskey.

Maple-cream pecan pieBeat 1/4 cup sour cream into the eggs in step 2. Reduce the corn syrup to 1/4 cup and replace it with 1/4 cup maple syrup (Grade B, if you can find it). Omit the butter. Omit the bourbon. Add 1/2 teaspoon vanilla extract.

The history of Derby Pie®

Derby-Pie® is a close relative of pecan pie but it’s made with walnuts and chocolate. It was invented in 1954 by George Kern and his parents, Walter and Leaudra, the managers of an inn near Louisville. The Kerns spent hours in the kitchen trying to come up with just the right blend of ingredients. Once they’d got it down, they had to give the pie a name, and because each family member had a favorite, they left it to chance by literally pulling the name out of a hat.

Fourteen years later, the pie had become so popular that the Kern family elders marched off to Washington, D.C., to register its name with the U.S. Patent and Trademark Office. To this day, Walter and Leaudra’s heirs fiercely protect their family’s pie heritage. Not only is the name a registered trademark, but the recipe itself is a closely guarded secret—only four people know the formula.