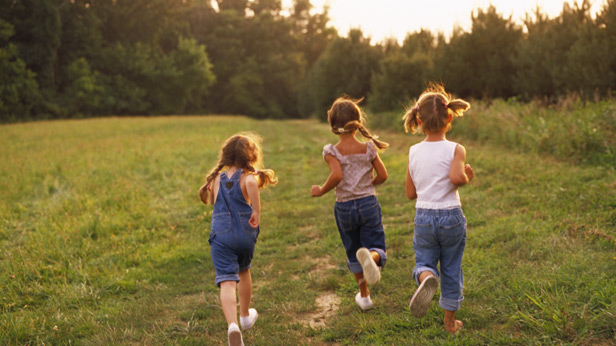 Break your kids out of their digital haze and get them outside to play. Here are 17 outdoor games that don’t require anything but open space and a few friends—which means you can play them anywhere and anytime you hear the inevitable “there’s nothing to do” this summer!

Tag is the most universal outdoor game. Play is simple: one person is “it” and others try to avoid being tagged. Whoever gets tagged becomes “it,” and the game starts over. Here are some fun variations:

Freeze Tag. The player who is tagged “freezes” in the position she was tagged in. She remains frozen in place until another player tags her and sets her free. The goal for the person who is “it” is to tag and freeze all of the players. Then “it” gets to choose who is “it” next.

Setting boundaries and creating a time limit are helpful for Freeze Tag. If you have a large group, make the game about freezing as many people as possible during a set amount of time. Play it several times with different people being “it.” The person who freezes the most people during the time limit wins.

Chain Tag. This is another great variation for a large group. The first person who is tagged joins hands with whoever is “it,” and together they chase down the other players. As the chain grows, only the players on the two ends may make a tag. The last person to avoid the chain is the winner.

Shadow Tag. Instead of physically touching a player, whoever is “it” only has to step on a player’s shadow to tag them. In this variation, the game is often to find ways to hide your shadow.

Skip, Hop or Walk Tag. In these versions, players have to skip, hop on one foot or walk instead of run.

Pair Tag. Two players join arms, making a pair. When whoever is “it” tags one member of the pair, she then replaces that person in the pair. The person who was tagged is now "it."

Hide-and-seek is another favorite backyard game. Before the game starts, set boundaries and instruct players about safe and unsafe hiding spots. You also need to designate a tree or some other object as the base. In classic Hide-and-Seek, the seeker counts to 100 while other players hide. Then the seeker calls out, “Ready or not, here I come” and tries to find and tag all of the players before they can get back to base. Players who get tagged are out for the rest of the game. The first person found and tagged becomes “it” in the next game. Here are a couple of other ways to play:

Sardines. In this variation, one person hides while the other players close their eyes and count to 100. When the counting finishes, a second player opens her eyes and tries to find the hidden person while the others keep their eyes closed and start counting to 100 again. If the second person finds the hidden person, she joins them in their hiding space. If she doesn’t, she’s out of the game. Play continues until each player has a chance to be the seeker.

Ghost in the Graveyard. This game is played in the dark. Make sure the area is free of obstacles that are hard to see. Declare a tree or some other object the base. One person is the ghost. The ghost hides while the other players count to 100 with their eyes closed. When the counting is over, the players go searching for the ghost. When someone finds the ghost, he shouts, “Ghost in the graveyard!” Everyone runs to base while the ghost tries to tag someone. The tagged person becomes the ghost for the next round. If the ghost fails to tag someone, he remains the ghost for the next round.

One variation is to allow the ghost to tag people before she is found. That increases the spooky factor quite a bit.

In a classic game of Relay, a group divides into two teams. A starting line and a turning line are declared 30 to 50 feet apart. The two teams line up in single file. When the person serving as the referee says “ready, set, go,” the first player in each line races to the turning line and back to the starting line. He tags the next person, who then takes off for the turning line. The team to get through all of its players first wins. Ready to turn up the fun? Try these twists:

One-foot Relay. This is played the same as the classic relay but players have to hop on one foot.

Back-to-back Race. Players pair up in twos and line up at the starting line back-to-back, with their elbows linked. When the race starts, the pair moves toward the turning line as best they can. They may not unlink arms at any time. The pair that gets back to the starting line fastest wins the race.

Mother, May I? In this game, one player is designated "mother" and the other players are "children." A start and finish line are selected. The children line up side by side at the start line, as if to race, and the mother faces them from the finish line. Each player must ask the mother permission to move ahead. A player may ask, “Mother, may I take five giant steps forward?” Mother can respond with a "yes," a "no" or a more complicated instruction, such as, “No, but you may take two hops forward.” Then the player must ask, “Mother, may I?” before moving. If he forgets to ask permission or makes a wrong move, he has to go back to the starting line. The child who gets to the mother first wins and becomes mother in the next game.