How we celebrate: Memorial Day 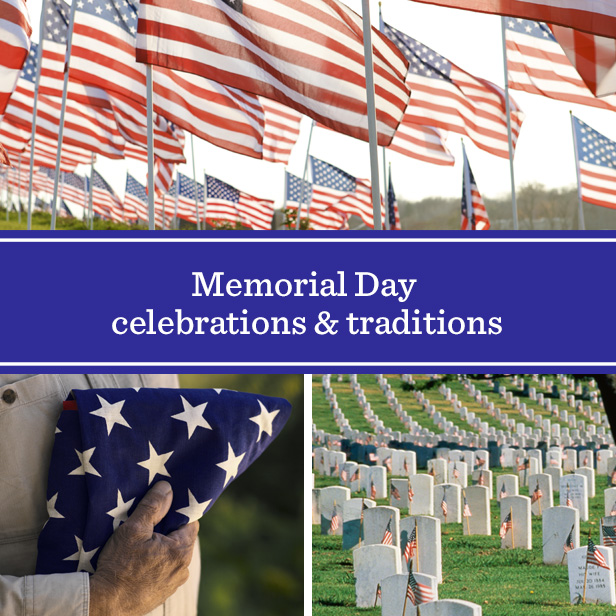 Although Memorial Day weekend has become synonymous with the start of summer and backyard barbecues, the original purpose of the day—to honor men and women who have died while serving our country—is still alive and well. There are as many ways to celebrate Memorial Day as there are families and communities. Below, a few of our readers share theirs. We hope these stories inspire you to make your own Memorial Day celebration more meaningful.

Every year, our local cemetery flies hundreds of flags on Memorial Day, each flag dedicated to a veteran who has passed away. While I was growing up, my family would track down the flag honoring my grandfather and then walk to his gravestone and decorate it with fresh flowers. It was a great way to be together, remember him and celebrate with our community.

My father served in the U.S. Army during World War II and was a longtime member of the Air National Guard. Memorial Day always falls on or near the anniversary of my father’s death (and also near his birthday), so it's a somber time of year for my family. So, we tend to have a low-key weekend, which is fitting for the meaning of Memorial Day. We don’t always get out to the cemeteries, due to distance factors, but we try to gather as a family and spend time together—which would have meant a lot to my father.

This year will mark the 90th annual Memorial Day Flag-Raising ceremony in my hometown of Marquette, Kansas (population 682). The evening before, American Legion members (with help from kids in the community) place U.S. flags and paper poppies on the graves of all the veterans buried in our town’s four cemeteries, and everyone turns out to decorate the graves of their lost loved ones.

The next morning, the whole community gathers at Riverview Estates, the nursing home in town, for a flag-raising ceremony and a medley of patriotic songs performed by a choir of current and former community members. The ceremony finale is a moving call-and-response “Taps,” followed by a three-volley salute from American Legion Honor Guard members. The community caravan then travels to each cemetery, where we repeat the ceremonies and pay our respects. At the final stop, the church hosts a barbecue lunch for everyone to gather for food and fellowship. It’s a beautiful day of remembrance that makes me proud to call this little farming community in the middle of the map my hometown. — Traci F.

For our family, the Friday or Saturday before Memorial Day is spent cemetery-hopping, putting flowers on the graves of deceased family members. Some served in the military, but several did not. It is about remembering all who died. In recent years, this tradition has been an opportunity for my sisters and me, as well as my nieces and nephews, to not only spend time with our father/their grandfather, but to take time during the long car trip to learn about family history.

I belong to a large, extended family that finds any reason to get together. It’s no surprise that Decoration Day is woven into our family’s DNA. Since I was knee-high to my dad, I remember parents, grandparents, aunts, uncles and great-grandparents spending the month of April preparing for this annual event. Artificial floral arrangements were purchased, meals were planned and seating charts for cars were created.

Once the weekend finally arrived, we would all pile into the designated cars and start out on our 100-mile trek through the back roads of north central Missouri. Halfway through the trek, we would sit on a shady hill and have a picnic. The kids would play tag while the adults spent time catching up with one another. After the meal, we all piled back into the cars and continued on our journey. Now our caravan is much smaller and schedules tighter, but we still take time to visit at least 10 cemeteries and reflect on our relationships with loved ones who have passed. My children enjoy spending time with their grandfather, listening to his stories and learning about their family’s history. Some of the cemeteries are in obscure places, and we drive through beautiful countryside or venture through the wild grasses of a farmer’s pasture to savor the memories of lives lived well. Although we no longer take a picnic, we still stop and have lunch at small-town diners, talking with strangers and friends alike. And even though this tradition is still filled with solemnness, the joy of spending time with loved ones is euphoric. — Teresa T.

In 2009, Memorial Day became more significant for me. On that day, my friend, CDR Duane Wolfe, was killed near Fallujah when his vehicle was hit by an IED. Duane was scheduled to return from deployment just a few weeks later.

There aren’t enough words for me to tell everyone what a good, decent man Duane Wolfe was. Nor can I describe the loss I still feel when I think of his commitment to our nation, serving 34 years in the military. As Memorial Day approaches each year, I send a card and a letter to his wife. I want her to know the sacrifice she and her family endured is still shared by those who served with Duane. At the new U.S. Navy Seabee Museum at Naval Base Ventura County, a photo banner of Duane hangs outside the entrance. To some degree, I feel comforted knowing Duane’s death will not be forgotten. — Dave B.