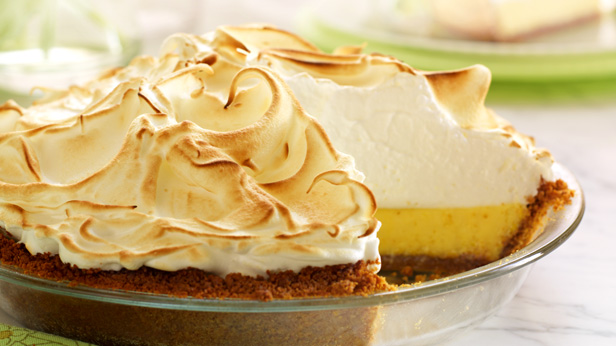 Key lime pie is all about the juice. Spanish explorers introduced small Mexican limes to Florida, and by the early 1900s, the limes were being cultivated commercially in the Florida Keys as key limes. The pie dates from that era, when key lime plantations were flourishing. It was probably a local favorite, but the person who gets credit for the recipe is a woman known to history only as Aunt Sally, a cook in the household of William Curry, Key West’s first self-made millionaire. Aunt Sally worked for the Curry family in the late 1890s, and this time period is often given as the date of her “invention.”

The three essential ingredients in a key lime pie are key lime juice, sweetened condensed milk and a graham cracker crust. Graham crackers had been around since the late 1820s, and canned sweetened condensed milk (patented in 1856 by Gail Borden) was popular in the Florida Keys because it did not need refrigeration. Key limes were, of course, readily available. For today’s cook, though, these limes—now imported from Mexico and Central America—can be harder to come by. Luckily, other tart fruit juices can produce equally delicious results (hint: combine regular lime juice with lemon juice) so in addition to our classic key lime pie recipe, we’ve provided you with several tasty twists on the traditional.

The original pie filling was not cooked, but because of modern concerns about the safety of raw eggs, we bake the filling first and then add the meringue.
Tip: If you can’t get key limes, use 7 tablespoons regular lime juice and 1 tablespoon lemon juice. 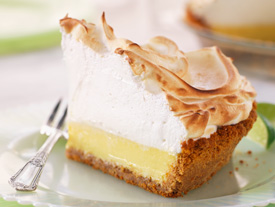 *To make the crust yourself, stir together 1 cup graham cracker crumbs, ¼ cup melted butter and 3 tablespoons sugar. Press into a pie pan. Bake for 10 minutes at 350°F to set the crust. Let cool before filling.

Lime pie in a coconut crust
Make a graham cracker crust and add ½ cup toasted coconut. Use regular lime juice instead of key lime juice. Bake as directed, but do not make the meringue. Top the pie with sweetened whipped cream.

Orange pie in a chocolate crust
Use 6 tablespoons orange juice and 3 tablespoons lemon juice instead of lime juice. Add 1 teaspoon grated orange zest to the filling. For the crust, blend 1 cup chocolate wafer-cookie crumbs (5 ounces) with ¼ cup melted butter and 3 tablespoons sugar. Press into an 8- or 9-inch pie plate and bake for 10 minutes in a 350°F oven to set. Let cool before filling and baking as directed.

Healthier key lime pie
Use low-fat sweetened condensed milk, 2 egg yolks and 1 white in the filling. Use a reduced-fat crust. Omit the meringue.